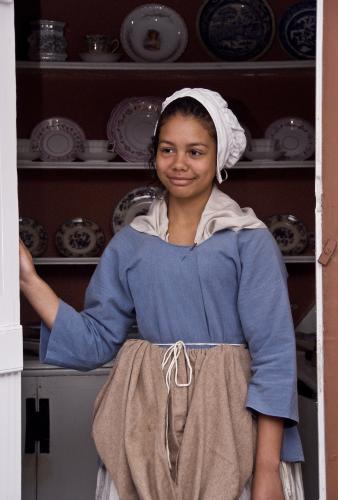 Mary Fowler’s assignment of indenture was purchased by Simeon Perkins for 10 pounds for five years in May 1789. She was returned a year later for not being a good fit. Slavery was legal and acceptable throughout Nova Scotia during this period, though it was beginning to be questioned. African Nova Scotians constituted a small minority of the population of Liverpool (less than 5%), even after the Loyalist immigration of the 1780s brought free Blacks as well as enslaved people accompanying their white owners. Most indentured and enslaved people’s stories were not recorded. However, we can piece together their stories though fragmented documentary evidence, objects, and oral histories. The following story is told from Mary Fowler’s perspective and is based on entries found in Perkins’ diaries.

“I was a slave in all but name. I was what they called indentured.  Amounted to about the same thing though.  You could be Black or white and be indentured.  If you were indentured you were an apprentice maybe or a servant, but a servant who couldn’t just pick up and leave if you felt like it.  Oh no.  You had to serve your time or have the law after you!  I was about 10 when I was indentured to Mr. Arnold.  I was to stay with him for 9 years.  But somehow Mr. Perkins, he gave Mr. Arnold some money and took me over.  I was moved around like cattle, with no say about it.

But - Mr. Simeon Perkins, he was a slave owner, too.  Just like many another Nova Scotian gentleman of them times.  You hear about all the free Black Loyalists who came here after the big Revolution in the States.  Seems to me there were just as many slaves.

Now Mr. Perkins, he was here before the Loyalists, but no difference - he had this slave Frank, for many years.  Yes, with Mr. Perkins it was ‘my negro boy’ this or ‘my boy Frank’ that.  And Frank wasn’t even his name, you know that?  When Mr. Perkins bought that boy his real Christian name was Jacob. So even our names could be changed.  Masters – they were always changing names around.

On Being Black in Liverpool in the 1780s

“Well, if you came along from the States with some white family - you know, a slave in the family - things hadn’t changed much from the old days.  Even if you were one of them ‘freed negro Loyalists’ you soon learned your place was same as always - mostly you had to work as a servant so you were still the one up before the rooster to make sure the fire was going nice.

But there’s this now, at least here in Liverpool there was few enough slaves and free Blacks, so they weren’t chasing you through the streets like in Shelburne.   Living together wasn’t in the cards for white Loyalists there, no sir.  Chase the negroes right out of the town to start their own little place.

No, things could have been worse here in Liverpool.  I guess.”

On Her time with the Perkins Family

“I was only here a few months.  Apparently, I didn’t just suit this family. So, I was let go.

Well, I wasn’t the only one - this family never kept anyone for long!  Why didn’t they have the same help from the start of time to the end, like other families?  No, I was only one in a never-ending line of working folks in this house – both Black and white folk.

Mr. Perkins always had a boy or a man to help out round the house - you know, getting in wood, making little repairs or whatever.  They most all boarded here in the house.  They came and went like the herring in the river out there, and that’s a regular fact!  I heard he had over 30 Black folk work for him over the years – some servants, teachers, carpenters, and others.  Then there was Mr. Perkins’ office clerks - now they worked mostly down at Mr. Perkins store, down towards the harbour, but some lived here in the house, too.

Mr. Perkins, well he and me didn’t always see eye to eye, but he was God-fearin’. He treated Black folk righter than most.  I know for a regular fact that Benjamin Field visited Mr. Perkins right here in this house and they talked about religion and all.  Mr. Perkins said it was to his advantage to hear out a negro “as well as if his skin was white.”

But me, I wasn’t here long – only long enough!”