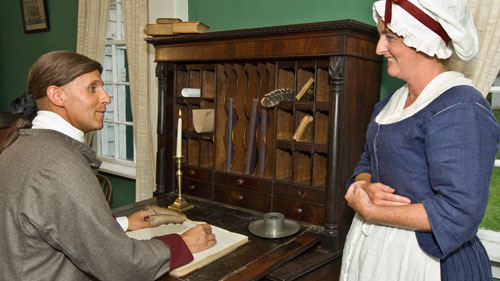 Who was Simeon Perkins?*

Simeon Perkins was born in Norwich, Connecticut—fourth in a family of 16 children. After receiving his education, he was apprenticed in the family business. In May 1762, Perkins was sent to Liverpool, where he established a thriving store and shipping trade. He quickly became a community leader in matters of business and public affairs.

By 1772, Perkins was made lieutenant-colonel of the Queens County militia. At first the settlers of Queens County were reluctant to take a stand against the American revolutionaries, since so many of them had New England roots. However, in time, raids by the American patriots spurred them to mount a defense.

Under Perkins’ direction, a battery was built in Liverpool in 1793 providing an official muster point for the Queens County militia. Local civilians were given permission to capture enemy ships, and Perkins was actively involved in these privateering efforts throughout his lifetime.