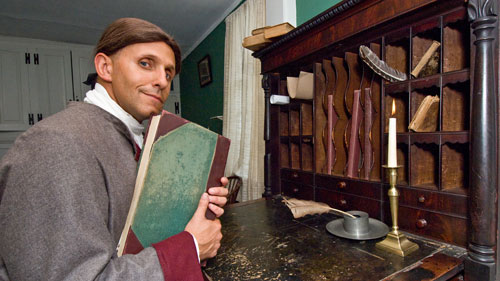 “Capt. Snow’s fishing schooner comes in, and report that there was a small schooner alongside them last night and told them my brother, Capt. Mason and Mr. Gideon White were all taken by American Privateers. That there is a great number upon the shore and that they have taken near 20 sail about the Head of Cape.”
-From the Diary of Simeon Perkins, Sept. 13, 1775
"Mrs. Horton delivered of a son last night. Capt. Horton has been gone near 1 yr. and 10 mos. Jane Nickerson, a single woman, was also delivered of a daughter. Several such instances have happened of late, to great disgrace of the place…”
-From the Diary of Simeon Perkins, March 26, 1778

Perhaps best known for the detailed diary he kept, Simeon Perkins provided a faithful record of his life and times. As in the excerpts above, his diary provides vivid detail about what life was like in Liverpool from 1766 to 1812. Today, the information recorded in Perkins’ diary finds new life through the exhibits and interpretation of Perkins House Museum, part of the Nova Scotia Museum.

Simeon Perkins' diary was bequeathed to the town of Liverpool in 1896 and turned over to the Queens County Historical Society in 1932 where it remains in their possession and on permanent display in the QueensCountyMuseum. C. Bruce Fergusson—in a biography for the Dictionary of Canadian Biography Online—describes Perkins diary as “a mine of information for the study of economic, political, and social institutions, shedding light not only on the life of a community but also on a region occupying a significant place in the North Atlantic triangular trade and an important position in the evolution of the second British Empire.”

In his diary, Perkins kept a careful record of births, deaths and marriages; faithfully recorded the weather; and often commented on religion, the war at sea, and public affairs. The Diary of Simeon Perkins was published in five volumes by the Champlain Society and edited by H.A. Innis et al, but the book is currently out of print.